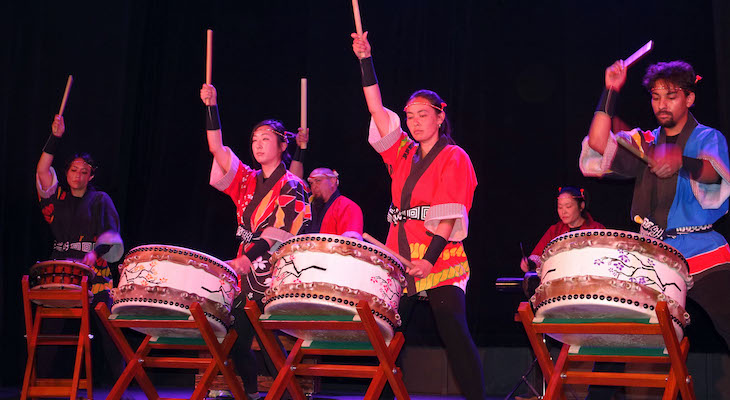 Many cultures celebrate the Lunar New Year, but the Chinese version is perhaps the best known. Santa Barbara often holds Chinese New Year events, but they are not always high profile.

Right here http://swt.org/events/lunarnewyear2020/ are my videos and photos of the Lunar New Year celebration at the Alcazar Theater in Carpinteria. I was grateful that the event was completely free.

The celebration opened with children presenting traditional Asian dishes prepared and served at the time of the Lunar New Year:

Chinese New Year legend says that the monster Nian emerges to do harm. It is hunted with loud noises and with the color red. Young children were invited on stage to bang on metal drums as Nian appears and runs away:

The rest of the celebration involved Hawaiian and Japanese cultural activities. As far as I know, these cultures celebrate Western New Year rather than Lunar New Year. In fact, on New Years Day 2019, we were in Little Tokyo in Los Angeles and took part in their Japanese New Year celebrations.

That said, the rest of the celebration was a delightful cultural experience!

The next section of the celebration was performed by “Hula Anywhere”, a Hawaiian dance group from Santa Barbara. They welcome new dancers and teach dance to anyone who wants to learn.

The next one was called Hiilawe:

The third dance was called Waika:

Their last dance was to the American song “Fly Me to the Moon”. They wanted to emphasize that the hula is a universal form of communication. It doesn’t matter what language the music is in.

The final performance of the celebration was given by Ojai O’Daiko Taiko Drummers. As stated above, Japanese culture celebrates the Western New Year. But this Taiko drum was still a fun way to celebrate Lunar New Year!

Afterwards, the drummers kindly posed with some of the children present.

It is not always easy to find these beautiful Lunar New Year events. Mark your calendar for the start of next year and start looking. You will enjoy !