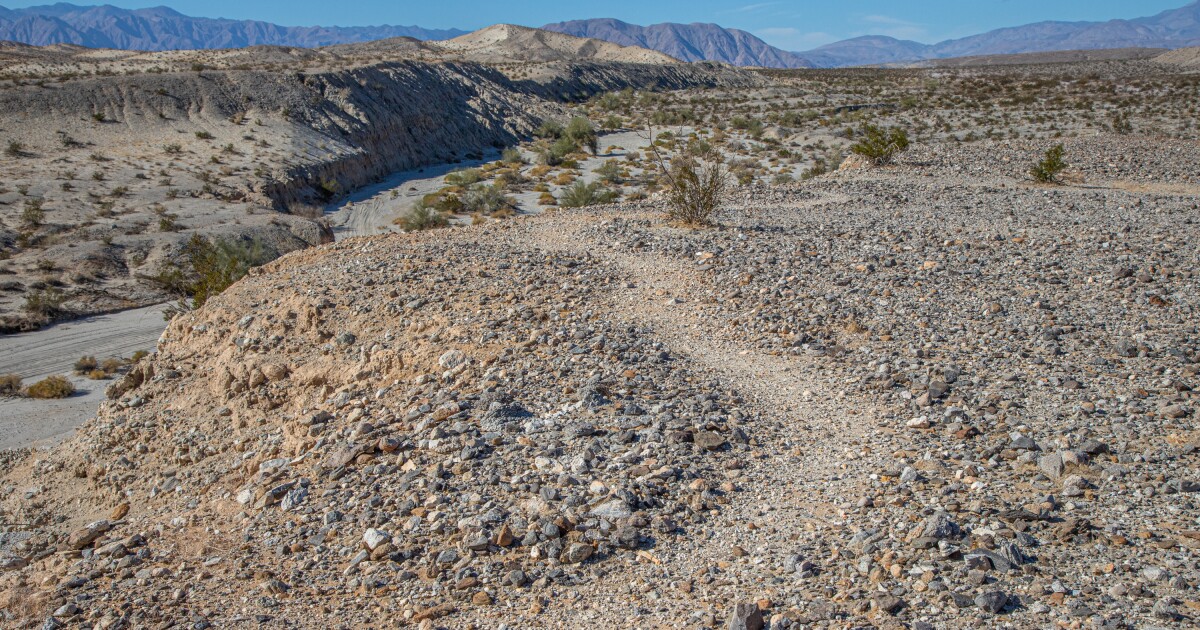 Robert Service’s poetic words swirled in my mind as I sat quietly on the windswept desert mesa in hopes of connecting with the unwritten past.

“… have you learned to know the small desert paths?”

Have you camped on the foothills, have you galloped on the chains,

Have you walked through the barren lands of the sun right through?

Did you sympathize with the mesa? Do you know his moods and his changes?

So listen to the Wild – it’s calling you.

It was another New Year’s Day and the time to listen to nature, reflect, assess and resolve on a personal level.

I can’t count the number of times I intentionally got lost but found myself on a New Years hike. It’s a personal tradition that has sometimes taken me along stormy January beaches or quiet mountain forests, but more often to the open spaces of Anza-Borrego Desert State Park.

I was again, this time, seated on a sterile and rocky mesa which is capped with a weathered desert cobblestone. From there I had a breathtaking view of the seemingly timeless badlands of Anza-Borrego.

Much of the blurry landscape is barren, but hidden within this wilderness are tales of ancient cultures and the history of the land that are now being uncovered.

It is a prehistoric place and it is only now that geologists, archaeologists and paleontologists are writing history as it is discovered.

The fossil remains of extinct sea creatures dating back 450 million years are preserved in these wild lands.

Fossil remains of larger animals such as the land sloth, nearly 3 million years old, or extinct creatures like zebras, saber-toothed tigers, Pliocene horses, and elephant-like mammoths dating back to 9 million years or more have been found in these badlands.

Part of my annual escape from the distractions of civilization is connecting with man and nature, both present and past.

On this New Year’s Day, the gift was filled with a cloudless sky and a magnificent red-tailed hawk floating above. But it’s a place of mystery, and I was also sitting with the past, a rough 100-foot-long image of a lizard scratched by unknown hands into the coarse cobblestone pavement that paved this barren landscape.

From ground level it appears to be nothing more than a clear path along the edge of a cliff, but from the air or Google Earth you can more clearly see a rough, stick-shaped figure known as the name of Lizard Intaglio. This ancient art form is also known as earth art, or geoglyph, created by unknown hands perhaps several centuries ago.

Despite the rich cultural history preserved in the vast expanse of Anza-Borrego, geoglyphs are relatively rare here.

Throughout the southwest there are hundreds of geoglyphs, some quite large depicting rough figures, humans, animals, or geometric designs. Several of these earth art figures are found in the Imperial County.

In other places like Australia, Chile, Peru, Mexico, and India, there are much larger versions of these objects which are best seen from the sky due to their size.

All of these geoglyphs were made by removing the darker surface stones, creating a visible image due to the lighter soil below.

There is a lot of speculation as to why they were created. Archaeologists suspect they may have been religious or ceremonial, but the reasons have not been preserved in the cultural history of Kumeyaay’s creators.

Geoglyphs are also difficult to date due to the lack of associated cultural objects. But there is progress underway that could allow scientists to pinpoint dates by analyzing desert varnish on rocks.

I look forward to this scientific endeavor, but in the meantime, on this blustery New Years day, I have sat down with this relic from the past and let my heart and mind drift like the soaring hawk.

What drew these ancient hands to this barren place to create their raw work of rock art? What was the message? How was the life of these people of the desert?

About 450 years ago, the great inland sea known as Lake Cahuilla still covered a large area of ​​what is today the Imperial Valley and a few kilometers to the east was at the foot of the hills where lies the Lizard Intaglio.

Perhaps the first inhabitants camped here and created this geoglyph while celebrating an abundant take of the nearby lake.

Sitting here any longer was not likely to answer those questions for me.

But once again, I found myself taking stock of another year and committing to the new year.

I decided to spend more time with nature. It is the food of the soul.

As I dusted off and prepared to leave, Robert Service’s words filled my mind again.

“Let’s travel to a lonely land that I know.

There’s a whisper on the night wind, there’s a starlight to guide us,

And the Wild is calling, calling … let’s go.