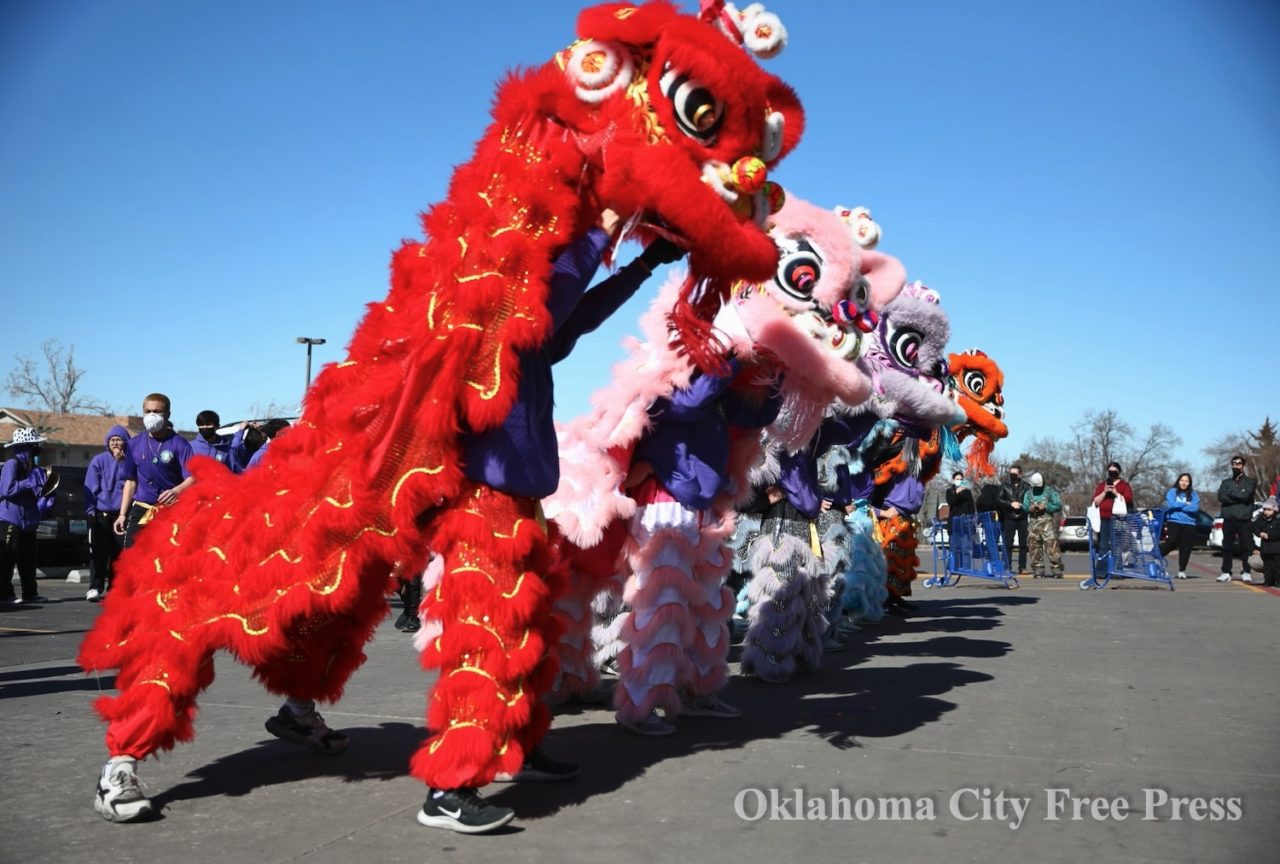 They welcomed the Lunar New Year, which began on February 1.

The Lion Dance Troupe of Giac Quang Buddhist Temple (GQ Dance) has been preparing for the Lunar New Year (February 1) celebration for more than three months.

The dance is usually performed in groups of two, where the front person moves the lion’s head and the other person the back. The show is accompanied by a musical group in charge of setting up the rhythm of the dance. It takes a lot of practice and coordination to move in harmony.

The troupe began the ritual around noon on Saturday February 12 in the supermarket parking lot where thousands of firecrackers were lit to cheer the crowd, signal the start of the performance and, above all, drive away evil spirits with its loud volume.

Most of the dancers are teenagers who volunteer so that OKC businesses and establishments can welcome the Year of the Tiger with luck and abundance while driving away evil spirits.

GQ Dance leader Hoang Tran, 18, and co-leader Donny Nguyen, 20, were really proud of the team for showing up for the dance even after taking the ACT test hours before the show.

Leaders told us that dancing helps them spread their culture and feel more seen and present at OKC.

“We wanted to do our best to make sure everyone knows we’re here, doing our thing, giving everyone a good year,” Nguyen told us.

Tran, an Asian American, said the show is important to him because he wants to share his culture and heritage with everyone so people can enjoy, appreciate, support and learn about these ancient traditions and different ways. of expression.

Over the past two weeks, various establishments in the OKC have invited dance groups to perform the lion dance and keep the tradition alive and present in the metropolitan area.

The Lion Dance being an ancient tradition, it exists in many countries and different religions.

In Oklahoma City, dance groups range from Buddhist to Catholic and are predominantly, but not exclusively, Vietnamese.

Several businesses in the Asian district such as the Lido’s Restaurant, the VII Asian Bistro, the Golden Phoenix have opened their spaces so that the lions can enter the interior of the establishment, giving a prosperous tone to the Year of the Tiger.

“Every year, every time we dance for the stores or every time people ask us to dance, we really give them the luck, the longevity and the prosperity that they want for the coming year,” Tran said. .

The lion dance is one of the most popular and widespread Lunar New Year celebrations.

Its origins date back more than two thousand years in China.

Most lion dances can be traced back to the northern and southern regions of China, although there are multiple dance forms today that can vary widely in style thanks to the diaspora who carried the tradition beyond the borders.

The performance of the dance itself, as well as the depiction and decoration of the lion, mutated as it merged with other cultures outside of China.

Saturday was the first time Ever Pereira and his family watched a lion dance.

Pereira is originally from Dallas, with Mexican and Salvadoran heritage, living in Oklahoma for over eight years. His wife is Native American and they enjoy learning about each other’s cultures, traditions and foods.

He said the experience was an interactive and fun time for the family. His favorite thing was the interaction between lions and onlookers.

“You can touch the lion’s fur, pet it and give it money for good luck,” Pereira said.

“Even though there are many cultures, all cultures are based on family, and we really enjoyed this one with my family,” he told us.

The story that anchors the dance is that of a village attacked by an evil creature. In desperation, the people of the community asked the lion for help, and the animal scared away the evil creature.

When the evil creature returned for revenge a year later, there was no lion around to protect them. So the villagers dressed up as lions and imitated his movements to ward off the evil creature.

Those dressed as lions would then go around the village to share good luck while graciously receiving donations for his service to the community.