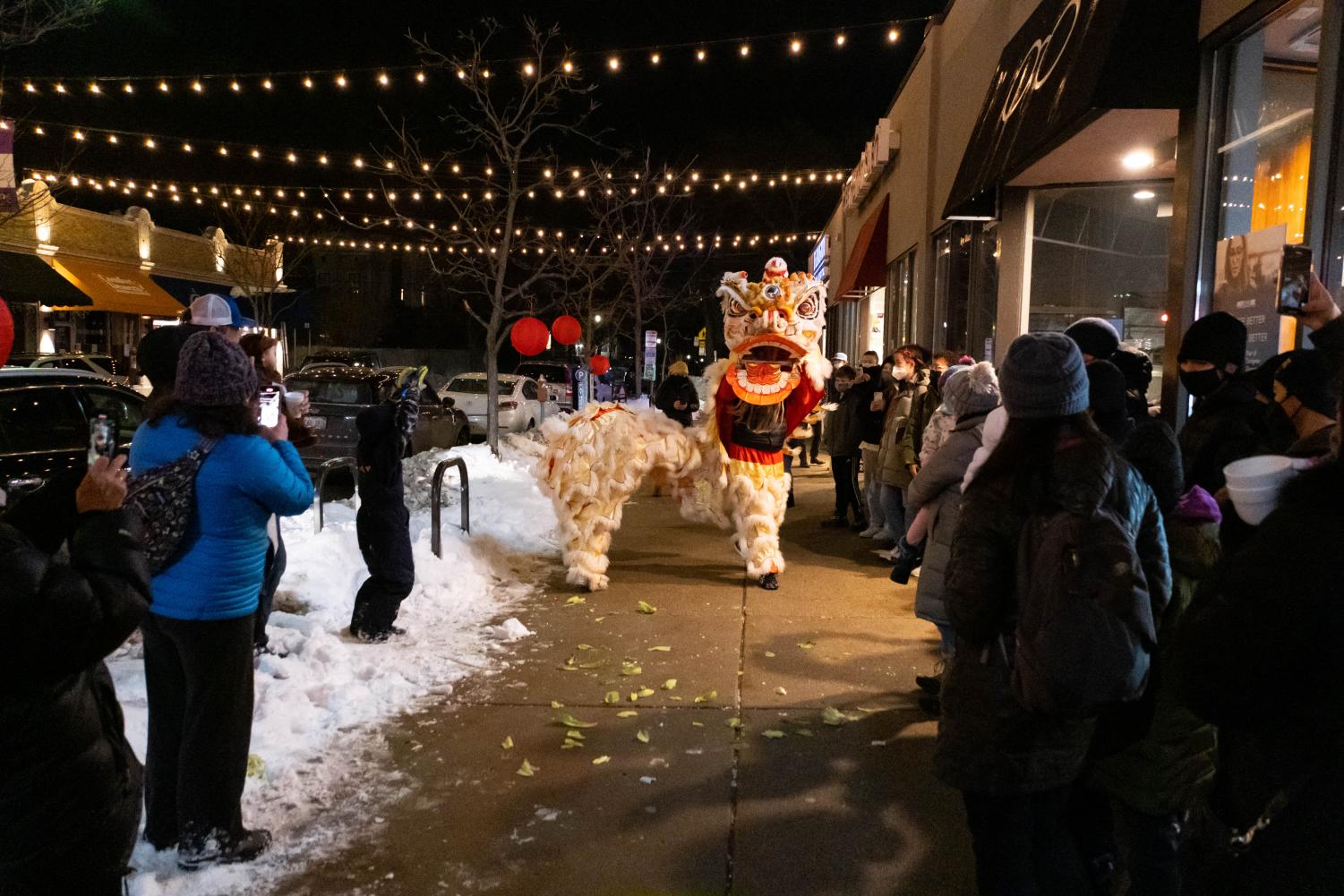 Last night, more than 70 guests at the Main-Dempster Mile Lunar New Year celebration watched a white, gold and red lion dance on the sidewalk decorated with red lanterns near the intersection of Dempster Street and Chicago Avenue.

The event was a collaboration between the Main-Dempster Mile, Evanston Pride, Children create change and Melissa Raman Molitor, an artist, educator and art therapist from Evanston who works to increase the visibility and representation of Evanston’s Asian, South Asian and Pacific Islander community.

Molitor said the event was important in cultivating a sense of belonging for Asians and Asian Americans in Evanston.

“Evanston doesn’t usually support the visibility and representation of the Asian community,” Molitor said. “It’s really important…for us to feel part of the community.”

The celebration took place at the 500 block of Dempster Street. Red paper lanterns hang from the trees on both sides of the street.

Molitor said community-building events like this celebration are also an important opportunity for all Evanston residents to experience a new culture and set of customs.

Katherine Gotsick, Executive Director of the Main-Dempster Mile, handed out informative postcards explaining traditional New Year’s phrases and traditions in Mandarin, such as the tradition of red envelopes, where parents and grandparents give their children red envelopes filled with money.

Molitor said the postcard was useful in raising awareness and educating around the holiday and its customs.

Organizers handed out greeting envelopes containing gift cards and sweets, reflecting the tradition of “hóng bāo” greeting envelopes. Other treats at the event included hot tea, which was provided by Dozika, a local restaurant.

Chicago resident Kam Cho formed the band with six of his college friends. Cho, who has been dancing since high school, said it was important to learn about other cultures.

“It’s always great to have a diverse culture,” he said, “just to share that knowledge.”

Northwestern graduate student Graham Pritchard and his fiancée, Qing Mao, stumbled upon the celebration. Pritchard said he didn’t expect anything to happen on Main Street, but it was nice to see lanterns and red envelopes hanging from the trees, as well as the lion dance.

Mao said it is important to have diversity and representation, adding that there are students at Evanston from all over the world. Originally from China, Mao appreciated how familiar the scene was to him.