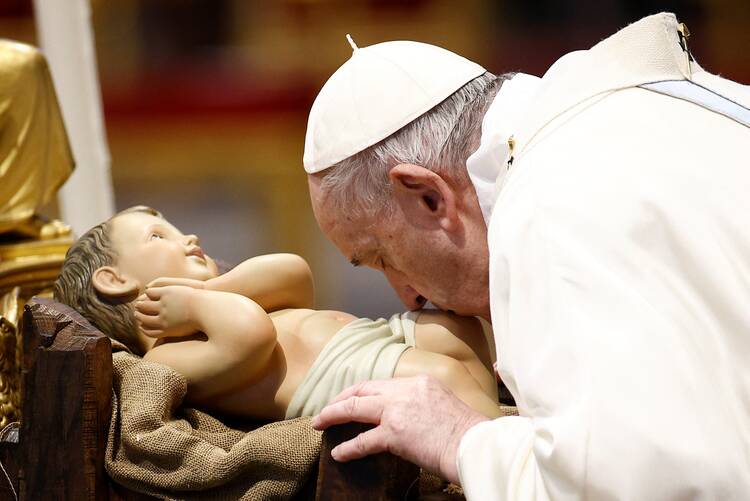 On New Year’s Day, Pope Francis denounced the widespread “violence against women” in the world today, saying that “to harm a woman is to insult God, who from a woman took our humanity”.

He did so in his homily during Mass in St. Peter’s Basilica on January 1, the feast of the Most Holy Mother of God and the 55th World Day of Peace launched by Paul VI in 1968.

“The New Year begins under the sign of the Mother”, he said, referring to Mary as Mother of God and Mother of Jesus and designating her as the woman par excellence in her role as giver and defender of the life. Francis said that women’s perspective on the world “can combine dreams and aspirations with concrete reality, without drifting into abstraction and sterile pragmatism”.

Pope Francis has appointed more women to leadership positions in the Vatican and in Vatican commissions than any previous pontiff. These include two recent appointments of nuns at the highest level, one in the Vatican City State administration and the other in the Vatican’s Human Development Dicastery, to positions usually held by priests or bishops.

Francis wore white clothes with blue stripes in honor of Mary. He concelebrated the mass – much of which is said in Latin – with more than 20 cardinals and more than 100 bishops, in the presence of some 2,000 faithful and the diplomatic corps. He was assisted at the altar by two cardinals: Pietro Parolin, Secretary of State, and the Jesuit Michael Czerny, in his first public act in his new role as interim prefect of the Dicastery for Promoting Integral Human Development.

We hope everything will be fine and then, like a thunderclap, an unexpected problem arises. Our expectations collide painfully with reality.

He began the homily by recalling the experience of Mary who had to endure â€œthe scandal of the mangerâ€, giving birth in poverty. Noting that Mary does not complain, but â€œkept all these things, pondering them in her heart,â€ Pope Francis encouraged believers today to have the same attitude when enduring â€œcertain ‘nativity scene scandals. ‘”. We hope everything will be fine and then, like a thunderclap, an unexpected problem arises. Our expectations collide painfully with reality.

“It can also happen in the life of faith, when the joy of the Gospel is put to the test in troubling situations”, he said, but “today the Mother of God teaches us to take advantage of the shock. She shows us that it is necessary: â€‹â€‹it is the narrow way to reach the goal, the cross, without which there can be no resurrection. Like the pangs of childbirth, it engenders a more mature faith.

Mary’s first attitude was to â€œkeepâ€, that is to say â€œshe clings to what happens; it neither forgets it nor rejects it. She keeps in her heart everything she has seen and heard. The beautiful things, like those told to her by the angel and the shepherds, but also the disturbing things: the danger of being found pregnant before marriage and, now, the humble stable where she had to give birth. Mary â€œdoes not choose and does not choose; She keeps. She accepts life, without trying to camouflage it or embellish it,â€ he said.

He underlined the second attitude of Mary, â€œshe guards, and she reflectsâ€ and said: â€œThe Gospel speaks of Mary ‘bringing together’, comparing her different experiences and finding the hidden threads that connect them. In her heart, in her prayer, she does exactly that: she links the beautiful things and the unpleasant things. It does not separate them, but brings them together. For this reason he said: “Mary is the mother of catholicity…we could say that she is catholic because she unites, she does not separate and in this way she discerns their greater meaning, from the point of view of God.

He said: â€œIn her mother’s heart, Mary realizes that the glory of the Most High appears in humility; it welcomes the plan of salvation according to which God must rest in a manger. She sees the divine Child frail and trembling, and she accepts the marvelous divine play between greatness and smallness.

Pope Francis has identified a close link between the attitude of Mary and that of mothers in the world today. “This inclusive way of seeing things, which transcends tensions by ‘holding’ and ‘reflecting’, is the way of mothers,” he said. â€œIt’s the way so many mothers come to terms with their children’s problems. Their maternal “gaze” does not yield to stress; she is not paralyzed by these issues, but sees them in a broader perspective. He cited, for example, â€œthe faces of all those mothers caring for a sick or troubled childâ€ and said, â€œWhat great love we see in their eyes! Even in the midst of their tears, they are able to inspire hope. Their gaze is conscious and realistic, but at the same time offering, beyond pain and problems, a bigger picture, that of care and love that gives birth to new hope.

This is what mothers do: they know how to overcome obstacles and disagreements and establish peace.

He said, â€œThat’s what mothers do: they know how to overcome obstacles and disagreements and build peace. In this way, they turn problems into opportunities for rebirth and growth. They can do this because they know how to “keep”, hold together the different threads of life. Pope Francis said: â€œWe need such people, able to weave the threads of communion instead of the barbed wire of conflict and division. And that’s what mothers know how to do.

Later that day, speaking from the window of the Apostolic Palace during the Angelus, Francis said: “As the new year begins with God who, in the arms of his mother and lying in a manger, gives us courage with tenderness. We need this encouragement. We are still living in uncertain and difficult times because of the pandemic. Many are frightened by the future and weighed down by social problems, personal problems, dangers stemming from the ecological crisis, global economic injustices and imbalances.

Francis, the son of migrants, told his global audience: â€œLooking at Mary with her Son in her arms, I think of young mothers and their children fleeing wars and famine, or waiting in refugee camps. There are many of them!” He said, “As we contemplate Mary placing Jesus in the manger, making him accessible to all, let us remember that the world can change and everyone’s life can only improve. if we make ourselves available to others, without waiting for them to begin to do so.If we become artisans of fraternity, we will be able to reconnect the threads of a world torn apart by war and violence.

He recalled that today is celebrated throughout the Catholic Church as the 55th World Day of Peace, which was launched by Paul VI in 1968. He reminded people that peace is a “gift from on high and said, “We must implore it from Jesus.” because we are not able to keep it. We can only truly build peace if we have peace in our hearts, only if we receive it from the Prince of Peace. Peace is also â€œour commitmentâ€, he said, â€œit asks us to take the first step, it requires concrete actions. It is built by being attentive to the slightest, by promoting justice, with the courage to forgive, thus extinguishing the fire of hatred.

Pope Francis said that peace â€œalso needs a positive gaze, which always sees, in the Church as in society, not the evil that divides us, but the good that unites us! Being depressed or complaining is useless. We must roll up our sleeves to build peace. He urged people to ask Mary, the Mother of God, the Queen of Peace, to “obtain harmony in our hearts and in the whole world”.