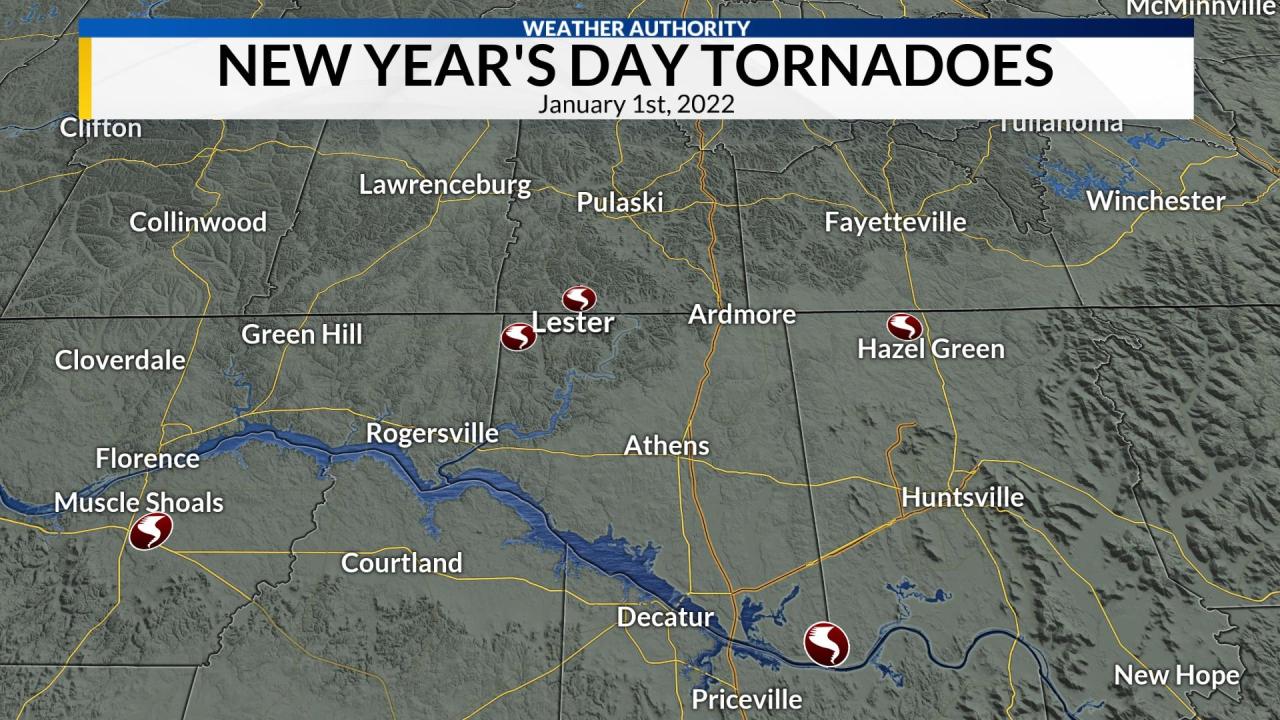 This is an archived article and the information in the article may be out of date. Please look at the timestamp on the story to see when it was last updated.

Severe weather on New Year’s Day brought the threat of heavy rain, high winds and tornadoes to the Tennessee Valley. In addition to the three tornadoes already confirmed that day, two more were confirmed on January 10. These tornadoes touched down in Madison, Colbert, and Limestone counties in Alabama, as well as Giles County in Tennessee.

The latest information released by the National Weather Service in Huntsville said damage in Colbert and Limestone counties was consistent with tornadic activity. After investigating damage near Lester in Limestone County, the National Weather Service determined that the damage was associated with an EF-1 tornado. The tornado touched down 2 miles southwest of Lester at 4:04 p.m. and remained on the ground for 8 minutes. Along a nearly five and a half mile long damage path, trees were snapped or uprooted. Peak winds for this EF-1 tornado were 86 mph.

After investigating damage near Muscle Shoals in Colbert County, the National Weather Service determined that the damage was associated with an EF-0 tornado. The tornado touched down 2 miles south of Muscle Shoals at 6:03 p.m. and remained on the ground for 3 minutes. Along the two-mile damage path, a few trees were uprooted and some minor shingle damage occurred to several homes. Peak winds for this EF-0 tornado were 65 mph.

Information on other confirmed tornadoes

The first confirmed tornado occurred near the community of Hazel Green. The tornado touched down 2 miles northwest of Hazel Green and had a track of approximately nine miles. Minor structural damage has occurred to homes and businesses in this area. The tornado had peak winds near 85 mph, an EF0 tornado and left 1 injured.

The Nashville National Weather Service confirmed that an EF-1 tornado touched down in Giles County on January 1. The tornado touched down 3 miles ENE of Lester and traveled nearly 10 miles before lifting 2 miles SW of Elkton. Several barns suffered roof damage and trees were uprooted. Peak winds associated with this tornado were 90 mph.